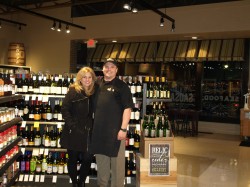 Maxbauer’s Market – a staple in Traverse City for over 100 years – has re-opened and been renovated since a grease fire forced the business to close this past July. The market has been transformed into a whole new store, with the same dedication to high quality meats and groceries that their customers have come to expect since it opened in 1912. Stephanie and Mark Wilson purchased the business in August of 2012 from Mike Deering, who owned it for 37 years.

“Although the business has remained the same, the customers and their needs have changed dramatically, even in just the last 5-10 years,” Stephanie Wilson explained, “We wanted to update the store while respecting its unique history. We want to take the old world heritage and meld it with a modern look and feel. Other designers we talked to wanted to ignore or cover up the original Bavarian feeling of the space; Dorina suggested we embrace it, yet make it feel fresh with use of color and re-purposing materials in an artistic way. We knew that she “go it,” it’s been a breath of fresh air to work with her.”